The Tale of Flopsy Bunnies

Mr. McGregor came back and picked up the sack, and carried it off.

He carried it hanging down, as if it were rather heavy.

The Flopsy Bunnies followed at a safe distance.

The watched him go into his house.

And then they crept up to the window to listen.

Mr. McGregor threw down the sack on the stone floor in a way that would have been extremely painful to the Flopsy Bunnies, if they had happened to have been inside it.

They could hear him drag his chair on the flags, and chuckle—

“Eh? What’s that? What have they been spoiling now?” enquired Mrs. McGregor.

“Don’t you be silly; what do you mean, you silly old man?”

(The youngest Flopsy Bunny got upon the window-sill.) 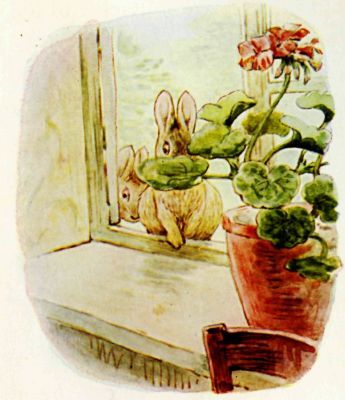 Mrs. McGregor took hold of the sack and felt it. She said she could feel six, but they must be old rabbits, because they were so hard and all different shapes.

“Not fit to eat; but the skins will do fine to line my old cloak.”

“Line your old cloak?” shouted Mr. McGregor—”I shall sell them and buy myself baccy!”

“Rabbit tobacco! I shall skin them and cut off their heads.”

Mrs. McGregor untied the sack and put her hand inside.

When she felt the vegetables she became very very angry. She said that Mr. McGregor had “done it a purpose.”

And Mr. McGregor was very angry too. One of the rotten marrows came flying through the kitchen window, and hit the youngest Flopsy Bunny.

It was rather hurt. Then Benjamin and Flopsy thought that it was time to go home.

But next Christmas Thomasina Tittlemouse got a present of enough rabbit-wool to make herself a cloak and a hood, and a handsome muff and a pair of warm mittens. THE END 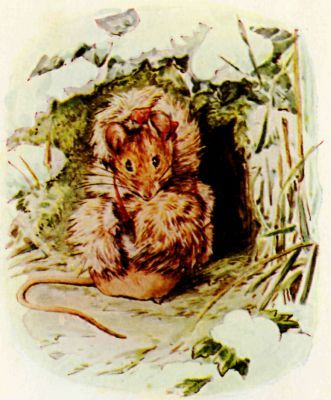